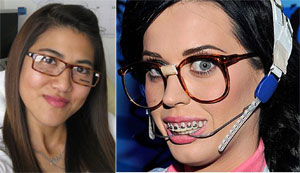 I woke up this morning feeling really excited and nervous because today my engagement ring should be back in store after re-sizing. After not having it for a week I did feel a bit sad without it, I was hoping they will call me bang on at 9am when they opened but that didn’t happen.  I waited and waited for that phonecall to inform me my ring was ready for collection and then it finally happened- my phone rang at 1pm.

So off I went and while I was driving I was listening to radio one when a Katy Perry song came on (last Friday night).  I remember watching the music video to that while I was gyming last week. She had some really big round geeky glasses on but I remember they had a tortoiseshell effect, which I thought it was pretty cool. In our PANTONE range of glasses (system 2) there is also a pair of tortoiseshell effect glasses which I love and I will soon make them another pair of my glasses. Hehehe. They are not as round as the Katy Perry’s ones but just as cool 🙂