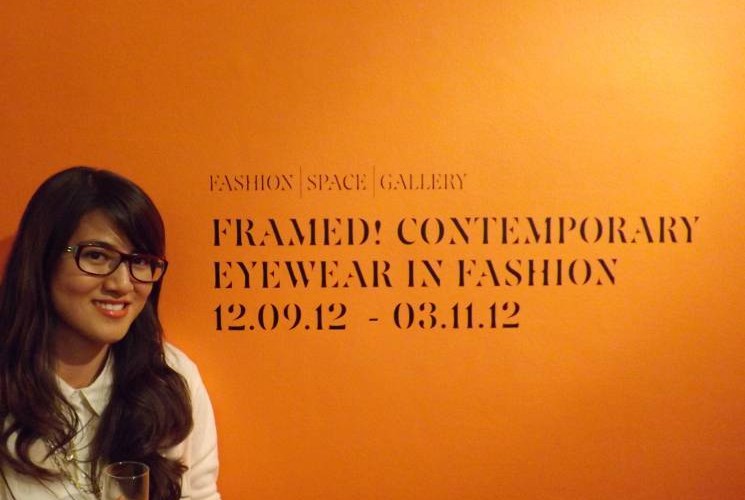 The London College of Fashion is one of the best fashion colleges and some people may not know this but they do have their own gallery space where they will showcase some very exciting and interesting exhibitions for free for the general public. From September 12th – 3rd November they are holding an eyewear exhibition called the Framed Exhibition which I am sure you have heard me banging on about for the past two days as I went to the private viewing.

That gallery space was like heaven to me, it shows the history of eyewear and some never seen before glasses from some of the best eyewear brands around, such as Cutler and Gross, Silhouette and Mikyta. It also tells a story of how eyewear has become what it is today. A truly fascinating exhibition and about time too that someone has thought about doing an exhibition just on eyewear because it does often get neglected! 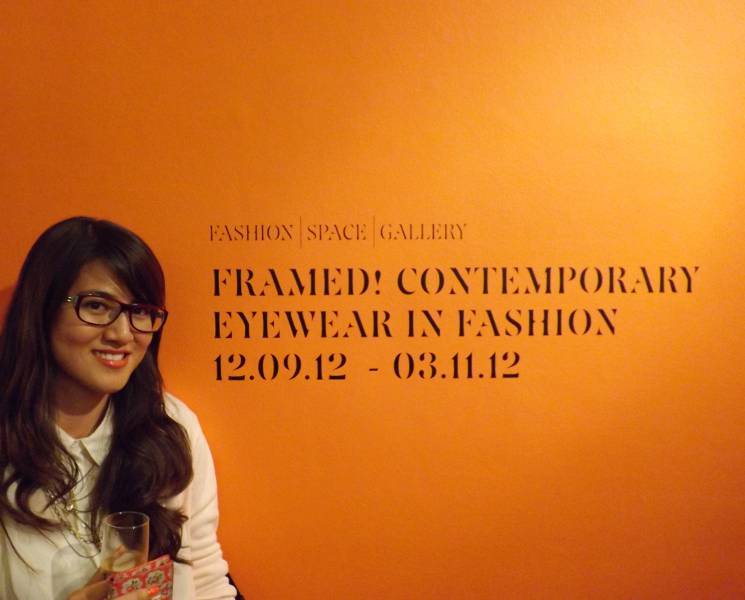 Me at the Private view wearing m.kenics

For me the private viewing was not enough time to get around to see every single frame because there were 200 of them. With some never seen before,  loaned from museums and private collections, eyewear companies,fashion houses and bespoke manufacturers. 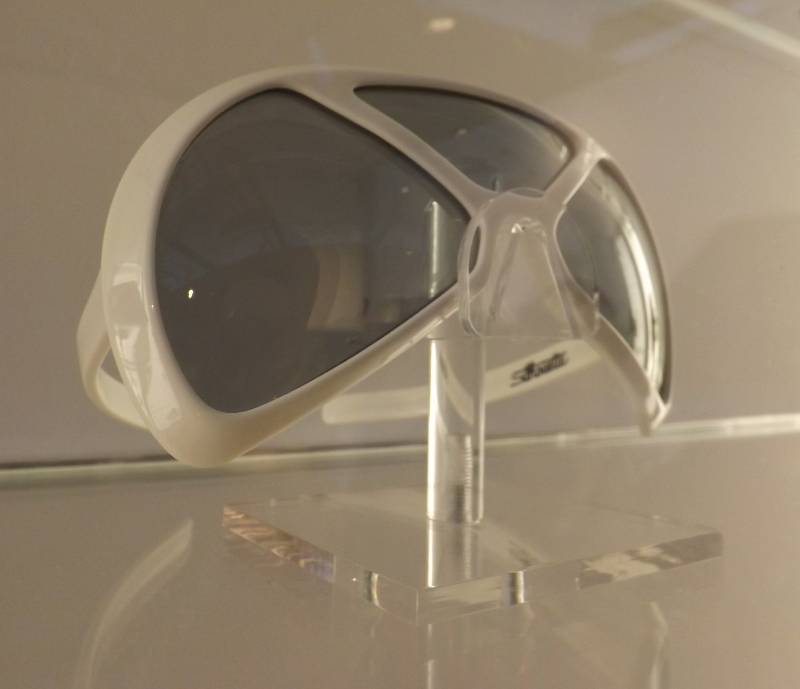 Framed Exhibition Fact – Did you know Frames have been around as early as 1326?

Here are some interesting facts for you -according to historians, the year 1326 was the earliest reference to eyeglasses in the UK from the Bishop of Exeter. Of course back then I am guessing people use them as a necessity rather than an accessory. However, wearing statement eyewear started as early as the late 1600’s. Now that is something that might win you a prize in a pub quiz and I am not going to give too much away because you have got to see this exhibition yourself! 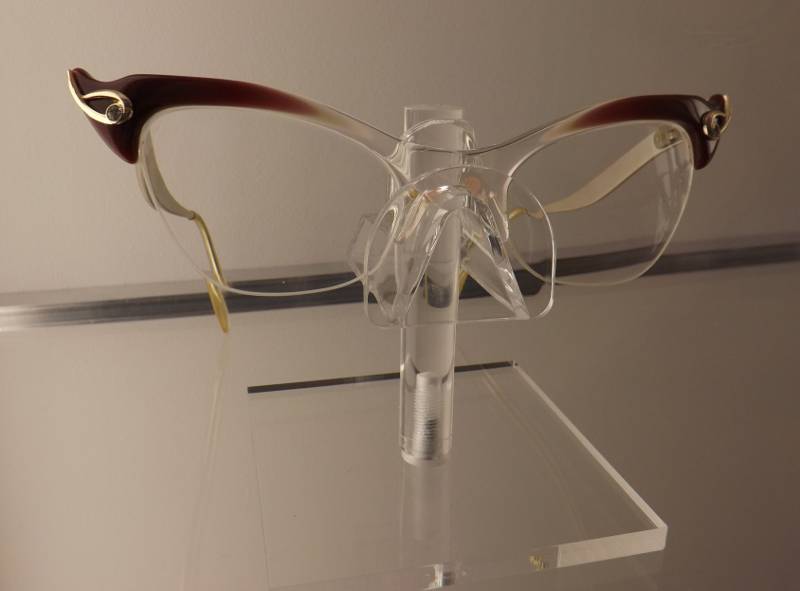 After seeing the Framed Exhibition I almost felt eyewear has gone backwards and only now it has moved forward again. Why do I say that? Well, glasses from the around the 50’s right through to the 80’s seem more creative, stylish and cool but then that kind of stopped and the view of glasses changed. By changed I mean it was almost uncool to wear glasses but maybe that was down to the lack of great design in eyewear around that time. Only in the past 2-3 years eyewear has really put it foot back on the fashion map where people are slowly becoming more open to the idea and once again eyewear is becoming cool. 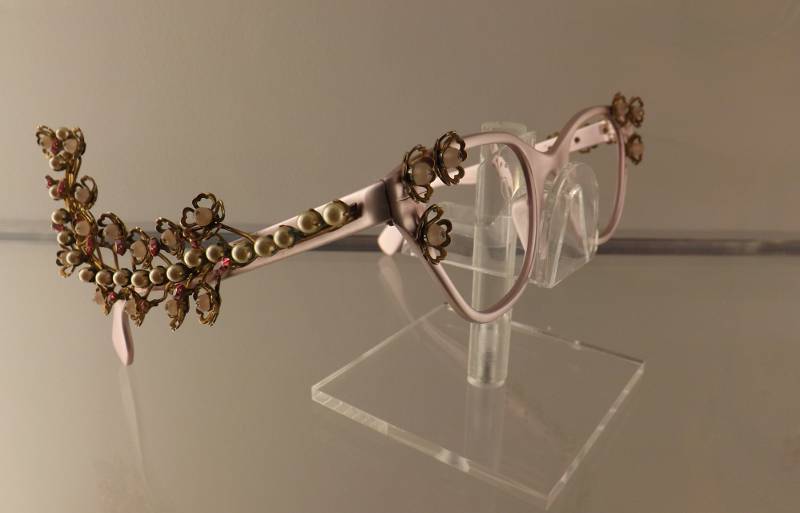 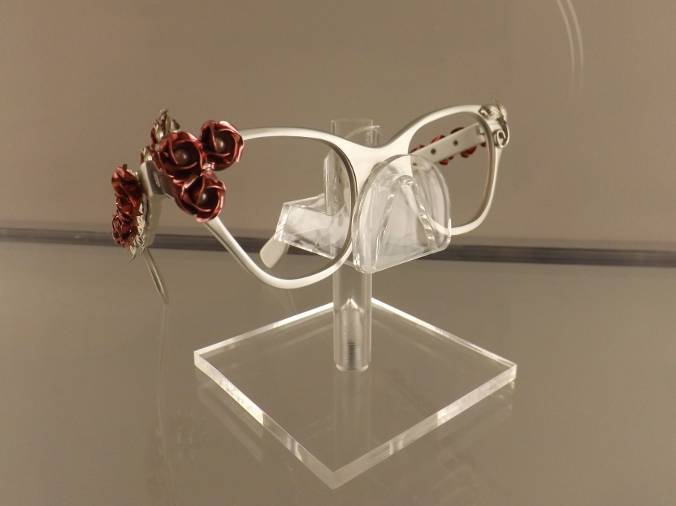 I mean don’t you agree the two frames above just gorgeous and so timeless? If you had a frame like that you would not be ashamed to wear them that is for sure! It is like wearing a very nice piece of jewellery around your face. 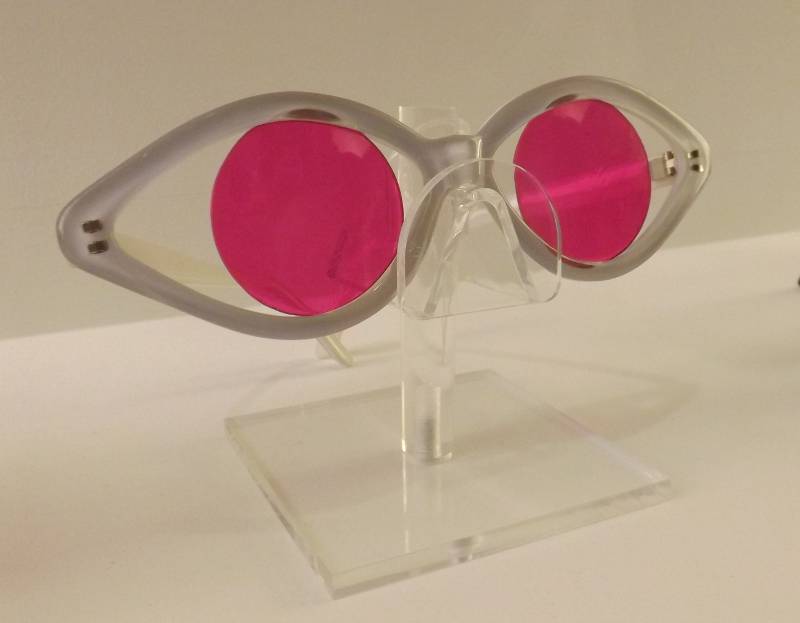 I have no idea why but I love this frame so much! I think the design of it is great and really fun. Obviously it is supposed to be a set of eyes but that adds an element of fun into eyewear 🙂 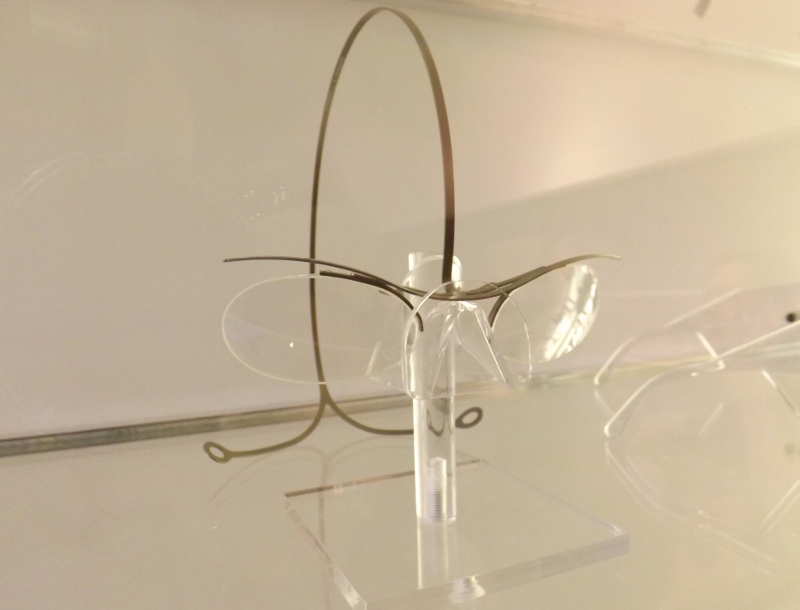 When I saw the glasses shown above I was standing there imagining how gorgeous would it be if it was customised further. Imagine if the metal part going down the back of your head was decorated with pearls and crystals, how pretty will that be!? I mean now days you can buy hairbands like that so why not incorporate it into eyewear?

As well as seeing all these amazing glasses (I cannot stress enough that YOU MUST GO AND SEE FOR YOURSELF!) the highlight for me was actually seeing and meeting some of the most influential people in eyewear. For me it was meeting Mr Cutler from Cutler and Gross, I actually felt a bit start struck and still do now, I was really nervous about going up to him and say hi because I didn’t want to say the wrong thing and look silly but what a nice man!

Me and Mr Cutler at FRAMED exhibition

He very kindly let me have a photo with him and I will treasure this photo forever! A very influential man in eyewear, especially the British eyewear industry and now the creative director of Cutler and Gross, Monica Chong is taking it to the next level and really putting eyewear in the fashion radar!

Cutler and Gross also have a highly exciting collaboration coming up with one of the most well know fashionista’s/pop star’s in the world. I am not going to say who, but if I give you these clues then I am sure you will know who it is… she used to be in a girl band called Spice Girls and married to a footballer also known as golden balls 😉 …

Want to check out the exhibition yourself? Then click here to find out more. The exhibition started on the 12th September and runs until the 3rd November. If you are a budding eyewear designer, work within the eyewear industry or have an interest in eyewear then YOU MUST GO!!!! Sorry to sound like a broken record but basically you need to go!