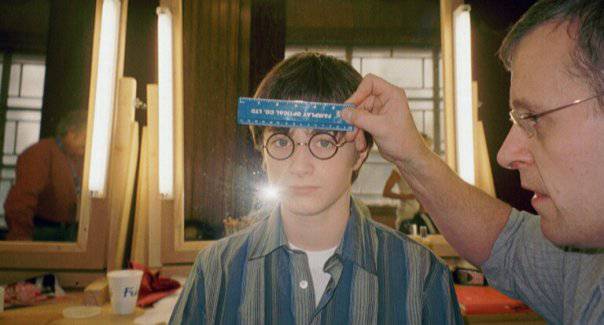 Who is the Guy Behind Harry Potter’s Glasses?

The Harry Potter series must be one of the most successful series of books ever and J.K Rowling must be loving it because the fan base is obviously not just from the UK but around the world. All my cousins in Hong Kong were reading the books and have watched the films so it has certainly brought a lot of fame to the actors and actresses. Even most of my friends in the UK were obsessed by Harry Potter but I have to say, I never got into it. I don’t know why but I just never did. Not too long ago I wrote a post on my friend Bev who went to the Harry Potter tour in the Warner Bros studio, if you want to read the post then click here and yes she and many of my other friends are huge fans.

Harry Potter is of course one very famous wizard but as well as that the glasses he wears in all the films have also become a bit of an iconic accessory. All of a sudden you see people wearing round glasses but who is the person behind the iconic Harry Potter glasses? That is the question. They are not part of product placement so a brand did not pay for them to be in the film. That must mean someone designed them especially and I happened to meet the man himself at the book launch on Friday. I must say I was very privileged!

Harry Potter’s Glasses were designed by…

I was lucky enough to be given the exclusive picture above by the designer himself (on the right hand side of the photo). His name is William Luff and he specialises in eyewear design for films and TV. In fact if you have seen any glasses in British films or TV dramas then the are probably designed by him! Of course now days big brands are willing to pay big bucks just to be in a film, like in the latest James Bond SkyFall, Tom Ford have been rumoured to pay a ridiculous amount of money for product placement of their glasses.

However, if a movie requires a certain type of glasses and they can’t find anything suitable then that is where glasses designer William comes in. I guess the role is like a costume designer but in one specialist area. As you can see from the photo above it was taken during one of the fittings William had with a very young Daniel Radcliffe. This photo is truly a treasure and I would like to say a massive thank you to William and I am so looking forward to doing an interview with him so watch this space! Unfortunately the interview may well have to be delayed until the new year due to my busy work schedule before I fly back to Hong Kong (for my brother’s second wedding with all our family). I cannot wait! In the future if anyone claims to have designed the Harry Potter’s glasses then you know they are telling porky pies – Capeesh!