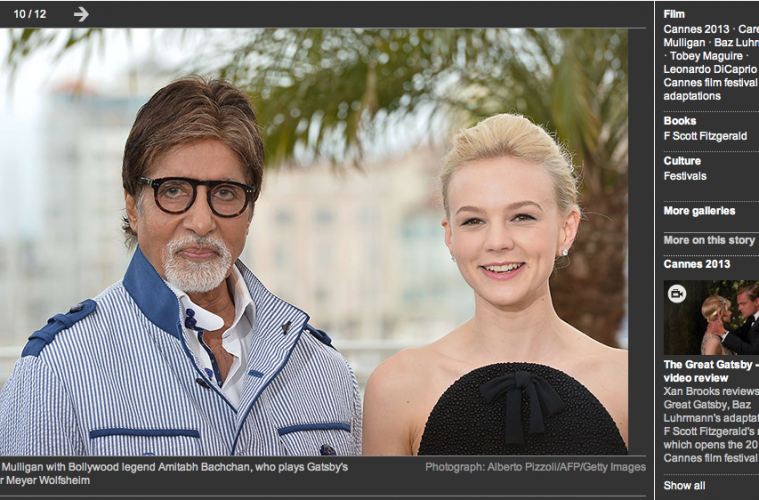 Cannes film festival is happening right now and I always love to have a nose and check out all the stunning frocks. It just seems like such a glamorous event. The most talked about film of the moment is of course The Great Gatsby and I am soooooo excited to watch it because I think this film will have a massive impact on fashion and eyewear. I am already thinking I need to get myself some fabulous hair pieces and jewellery.

Yesterday we saw all the stars walking the red carpet from the film and doesn’t Leonard DiCaprio look rather dishy. I forgot how attractive he is since the Titanic and let’s face it he did go a bit quiet after that film. I was eyeing up all the stunning outfits on the red carpet and checking out if anyone was sporting some rather cool specs and I sure did spot some.

Bollywood legend Amitabh Bechchan who plays Gatsby’s mentor in the film was rocking out some rather unusual specs. They are pretty cool though I think- they are almost a bit odd but in a good way because they suit him. They are rather striking and really do make a statement- I love the round shape aswell which by the way will be huge this season! It is all about round which funny enough goes perfectly with the whole 1920’s Gatsby feel.

You know what? I have been studying this picture ( I know, very sad) I am trying to figure out if he is actually wearing lenses with the frame. I mean with the amount of cameras flashing at his direction I am 100% sure the lens would glare slightly but it just looks absolutely perfect. If he is wearing lenses then I need some of those for my wedding next weekend. Anyway cool specs, great shape and I can’t wait to watch the film and see all the influence flooding through to our wardrobes and eyewear.

Check out the rest of the photos from www.guardian.co.uk