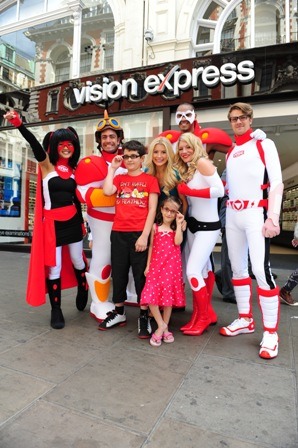 I woke up this morning to the news that Kate Middleton had gone into labour and over 12 hours later a baby boy was born into this world into one of the most famous families. Some may say what a lucky little boy, born into endless wealth but some may say unlucky with all the media attention and all the hype surrounding his birth. Nevertheless many congrats to William and Kate and I am sure they will make great parents, they seem very together as a couple if you know what I mean.

So with all the royal baby hype lately in the fashion world and just in every industry my interest has turned into kids eyewear. It got me thinking lots about eyecare for children because I don’t think it is a very talked about subject and seems to be something we are neglecting. How many of you guys know that children under the age of 16 get free eye tests? YES! IT IS FREE! Yet a recent study show (published on 18 July 2013-very recent) that only 19% of children take advantage of this and get their eyes tested. If you are a parent reading this and did realise then I think you are bonkers for not using the service!

National retailer Vision Express is launching its own children’s superhero comic later this year, in a bid to drive home to parents and youngsters the importance of eye tests following the release of NHS figures charting record low rates of testing for under 16s. To help stem the problem, Vision Express has joined forces with Medikidz, an award-winning, global initiative headed up by paediatric specialists Dr Kate Hersov and Dr Kim Chilman-Blair. Medikidz develops comics to convey vital healthcare messages to children through the adventures of a gang of five superhero characters called the Medikidz. The partnership with Vision Express is the first backing of the project from a major UK brand. It will see the development of a comic based on common experiences children may face with their vision, such as struggling to watch television, or read from a whiteboard at school. For me I think relating something to children is always a winner and hopefully something they can relate to like why can’t they see the whiteboard clearly at school.

If you are a parent reading this then please just drag your kids down for an eye test and get into a routine. I mean at the end of the day parents are quite happy dragging their kids to the dentist which is a bit more traumatic then an eye test. In fact 70% of parents are happy taking their children to the dentist but only 19% to their optician. I have mentioned this before that an eye test can detect a lot of the early signs of multiple illnesses. WHAT THE HELL?

Got you thinking parents? Well it is not too late to act now and Vision Express is launching quite a fun campaign and your kiddies can get involved…Vision Express is searching for a youngster aged 4 to 11 to become its star character in the comic. One winner will have their image hand-drawn into the superhero story by a team of skilled illustrators. Entries are open from 18th July 2013. Parents need to enter on behalf of their child, by simply completing their details online at www.visionexpress.com/medikidz .The winner will be picked in a prize draw, closing on 31 August 2013 and ready for the launch in October. Check it out!