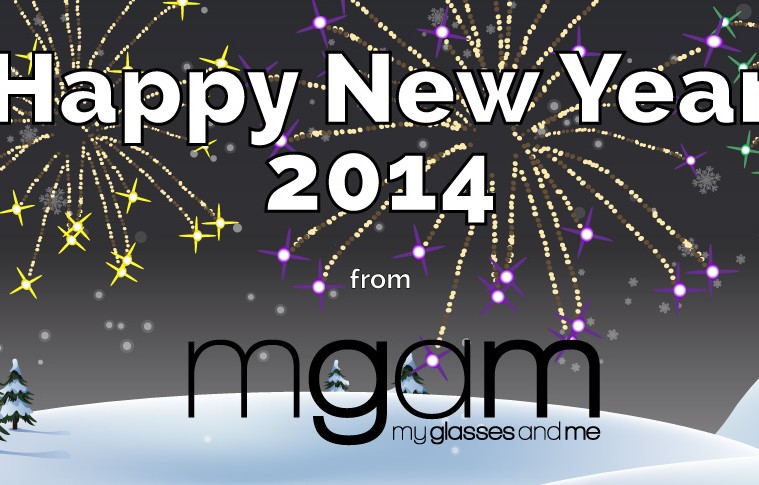 A Happy New Year From MGAM

I have been sooooo looking forward to writing this post because it is a summary of everything that happened in 2013 and what is to come in 2014. Looking back over the last year MGAM has come so far and there are so many exciting plans to come in 2014 that I might burst! So what has happened in 2013? Well back in April we saw the launch of the MGAM Magazine which is the only consumer based glasses and fashion magazine and it has been really well received by consumers, optical professions and fashion PR’s alike. The next big thing within MGAM was the all new look website which is sleeker and we are now on version 3- all within 2 and half years.

In September we saw the launch of the MGAM online shop where you can buy all things quirky and related to glasses and if you haven’t checked it out you should. There has been many exciting events which we have attended throughout the year and the two most memorable ones are the Specsavers Spectacle Awards and the launch of Taylor Morris Eyewear. During the Specsavers awards I met fashion designers John Rocha and Henry Holland, and I met Made in Chelsea star Oliver Proudlock, then at Taylor Morris I pretty much met the entire Made in Chelsea cast.

As we went toward the end of this year I took part in the Specsavers Metro Ad Campaign which was great fun and to end 2013 on a high MGAM has become the official blogging partner of the first EVER optical show 100% Optical in London Excel taking place between Feb 16th- 18th which I am working really hard on at the moment! Oh and not forgetting in my personal life, I got married back in May and went on an epic honeymoon for nearly 3 weeks!

So what is there to come in 2014? Some of the stuff I really can’t give you too much information about and I do have to keep it hush hush for now but hopefully I can tell you all soon. One thing I can say is MGAM will be working closely with couple of big brands and will be doing different things with each of them but that is all I am going to say for now! As for the MGAM magazine we are expanding it and we may have a sponsor coming onboard but again all will be revealed soon enough so stay tuned!

Last but not least MGAM is now a Limited company which is also highly exciting so we are growing that is for sure! Above all I just want to say a MASSIVE thank you to you lovely readers for supporting the blog and the magazine because without you guys MGAM would not be possible. I hope you guys will carry on supporting us in 2014 and we promise we will continue to bring you exciting news on glasses, fashion and just general optical wearers dilemma’s which we all know only us optical wearers will appreciate and understand. Have a FANTASTIC new years eve whatever you get up to and we will see you on the other side. SEE YOU NEXT YEAR!!!