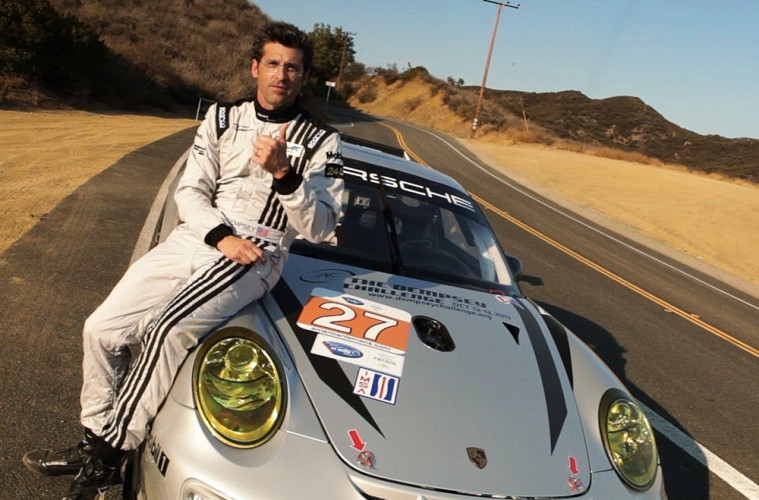 For my UK based readers who may not be too familiar with Patrick Dempsey, he is an American actor and a racing driver (pretty cool!). If you love American TV then you may know him from his role as neurosurgeon Dr Derek Shepherd on the ABC drama Grey’s Anatomy. As well as TV shows you may have also seen him in films such as Sweet Home Alabama and Transformers: Dark of the Moon, so yes he quite a big actor. Apart from his acting career he also has a passion for motor sport and has raced in many events such as the famous 24 hour race, Le Mans.

It is clear Patrick clearly enjoys turning his hand to different things and as an optical wearer it is an obvious choice to also work with an eyewear brand.  The brand he has chosen to work with is Silhouette- one of the best rimless eyewear brands in the optical industry. As I mentioned before, Patrick is a keen racing driver and it is interesting to hear as a racing driver they are not allowed to wear sunglasses (I assume it is due to health and safety).  Here is what he had to say… 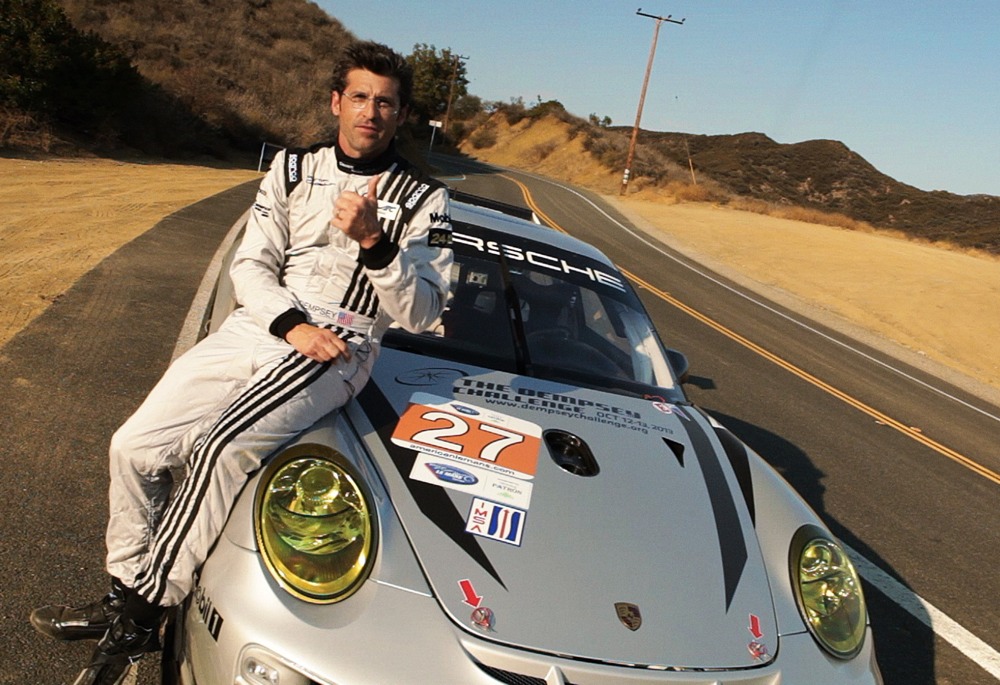 S: It seems to have been a good experience for you?

S: And are you wearing them in your real life?

PD: I wear them in my real life, yes.

S: We’ve learned that you’re a true supporter of the things you believe in. Is that the same with the brands you work with?

PD: There’s only so much time that you have. And only so much energy that you have. So it’s important that you commit fully, and that you believe in what you’re doing. If you don’t, then why bother? Certainly with the cycling, it’s a great way to promote healthy living, it’s a great way to stay in shape, and it’s great psychologically. And products that you believe in – a family-owned company that’s been around since the early sixties is an important thing in a society now where small companies, family-owned companies, are swallowed up by global companies. Its nice to see that the little guy is surviving, and the family-run stores are still in existence. I think that’s really important.

S: Are there any specific situations when you wear the sunglasses?

PD: I wear the glasses of course when I’m reading and when I’m driving. I can’t in the racecar on the track, but when I’m out and in the road car, I love wearing my sunglasses. I’m not allowed to wear any sunglasses in the racecar. I just hope that someday we can develop silhouette lenses that we can put in the helmet, into the visors that we have.

S: Tell me about your passion with car racing. How did you discover it?

PD: I’ve always loved cars since I was a little boy. My father was a big fan of car racing, and I started racing about ten years ago. I got a certificate to do a racing school ‘Skip Barber’, and that sort of ignited the passion and opened the door to go and start being a competitive driver.

S: And you’re doing car races around the world?

PD: Yes, I was at Le Mans this year. I’ll probably do more in Europe next year, hopefully in Asia, and certainly in the United States and Canada. The next race to come will be in two weeks in Austin, Texas, and then the next after that is VIR, and then Petit Le Mans at the end of the year.

S: What’s the difference between car racing and acting? Or are there any similarities?

S: Do you do any special training for your racing?

PD: Yes, I train here, I ride this route right here. I do a lot of cycling to stay in shape. It helps with the lower body. I go to the gym, I work the core. And run on the beach.Mentally, I work with a coach on the mental aspect of the sport. It makes a big difference too to stay mentally solid and strong. It’s a big component to being competitive, certainly. And it helps you in life, too.

S: How does technology play a role in success in car racing?

PD: Car racing is all about technology and the evolution of it. The more you can improve on the performance of the car – the horsepower, aerodynamics, suspension – all of those things will show dividends with performance and with the result at the end of the day. Innovation is key. Also for the glasses too, absolutely. Everything is about weight – a racecar is very similar to the glasses because of the weight. So you’d forget you’re wearing this, and sometimes you just want to keep the car very light as well. Everything is about weight and lightness.

S: How do you manage to split the time between your two passions, acting and racing?

PD: It’s a challenge to split time between acting and racing. I get tremendous support from the show and from my race team to make it work, but that is a fine line to walk, and some days you do it better than others.

S: What is the single most important thing you look for in your eyewear?

PD: I think it’s a combination of many things – it’s comfortability, and how does it look, how does it make you feel? And practicality, so that you can see what you’re needing to see. The rimless glasses make you almost feel as if you don’t wear glasses at all. They sort of disappear somehow, but at the same time there’s a nice sense of style to them. 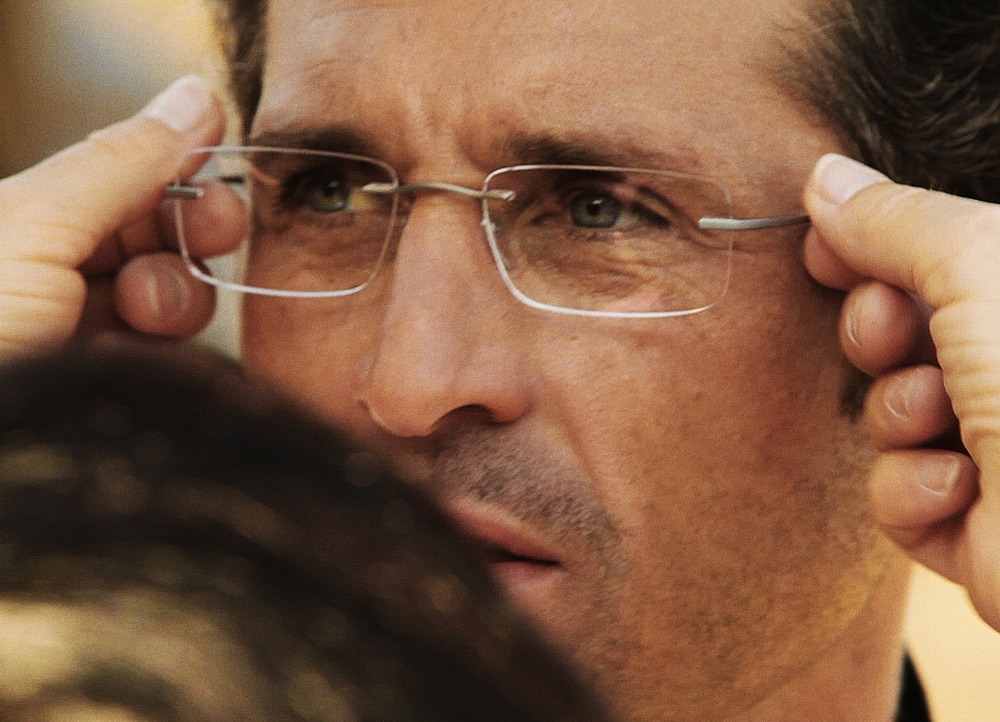 PD: I think once you start down a road where you have a relationship with a company, and what they represent, and who they are, you stay loyal to that – so certainly.

S: How would you describe your personal style?

PD: You try to have a style that’s a bit timeless. That’s not too trendy. That you look back at a picture in 5 or 6 year and there’s something classic about it, and consistent, and elegant – but with a little bit of an edge too, some sophistication. And hand-crafted; I think those are the things I look for.

S: How much are you influenced by design? What does it mean to you?

PD: Great design is a form and function thing, so how do you get the two to come together? And I think that’s how you’re influenced by it: form following function. Style, image, emotion – all those things.

S: What are your wishes and plans for the future?

PD: Wishes and plans for the future? I hope to continue to grow, and to follow my passions. I think people are constantly evolving and changing, and you have to keep working at that. Sometimes those things that you’re going through, whether it be difficult or not, are a test of character. It’s an important part of life. So I think to meet those challenges, and to continue to want to grow and learn.

S: Any plans to come to Austria?

PD: I would love to.

It sure was quite a long interview hey but an interesting one at that! After reading this I do wonder how not having the perfect vision could effect us in sports? I know from my bank manager, he said playing snooker is quite a challenge. I won’t write anymore as this has been a long one today!  I hope you enjoyed the interview and check out the Silhouette glasses because as Patrick Dempsey says, it feels like you are wearing nothing and to some optical wearers I am sure that sounds like heaven, right?