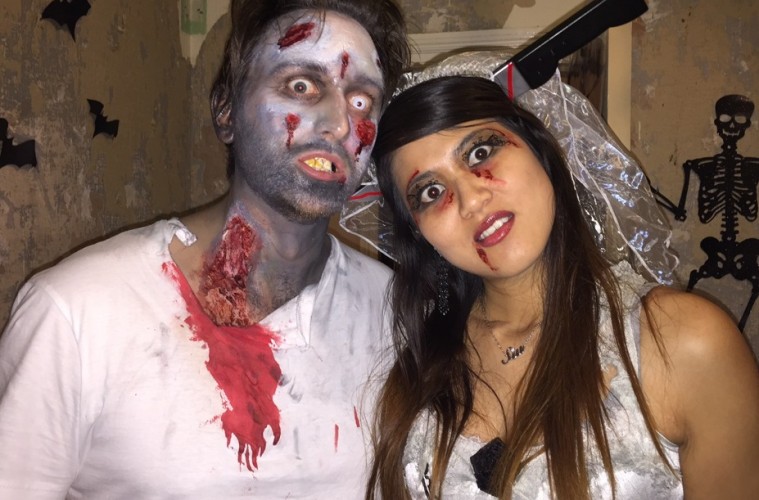 So did you all have a spooky Halloween weekend? I certainly did. My friend had a massive house party and the deal was who ever was the worst dressed will have to do shots as punishment so everyone put the effort in! A few weeks ago I spoke about this party as I was debating whether to incorporate glasses or not. In the end my husband and I decided to go as zombies. I was a zombie bride and he was just a baby eating zombie, as you do. It was a great night! My husband and I are both quite dedicated to fancy dress because we feel if you are going to go, then you have got to do it properly. I didn’t get the contact lenses like he did as I can’t be wearing my normal contacts with them.  Wearing glasses as a zombie just wasn’t scary I felt.

My husband did indeed wear a scary contact in his left eye and I have to say looking at them I don’t know how anyone could wear them because they are a lot thicker and bigger than normal contact lenses. My husband found them quite hard to put in so in the end he only had one.  About 2 hours into the party I could tell it was bothering him because he kept rubbing his eye and his eye kept watering, so just as well he only wore 1. 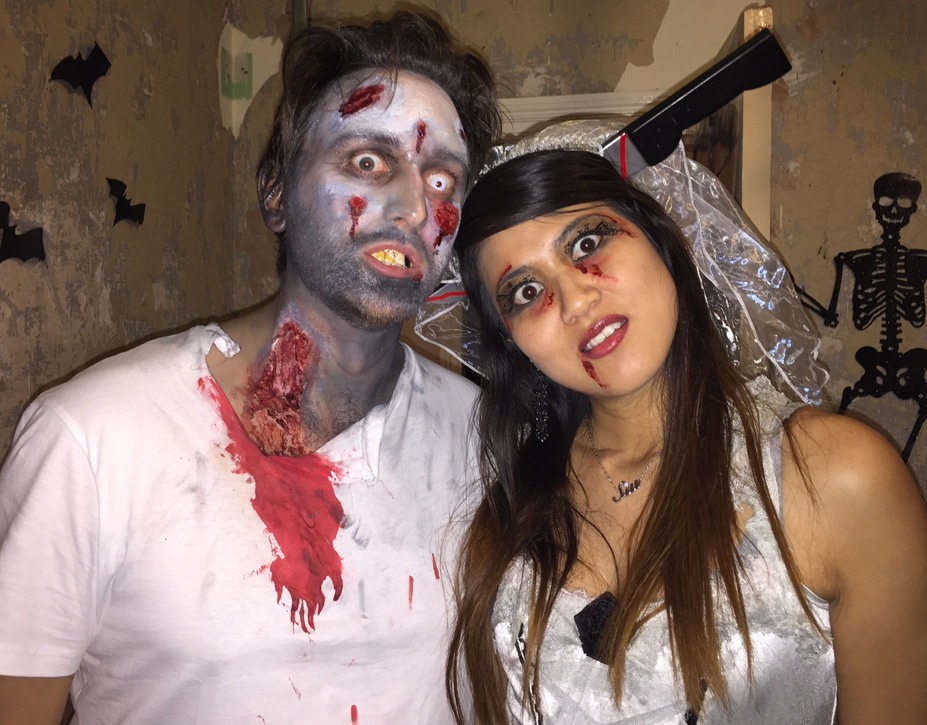 Lets just say by the end of the night he could not wait to take it out because it was itching his eye so much! Then when the party ended and he was taking it out, that was a task itself. Normally I pinch my contact lens slightly to remove them so I obviously shared that wisdom with him but no, not as easy as that with those type of contact lenses. Pinching it slightly does not work that well and because they are thicker it scratched his eye a little too. However, he was relieved he got it out with only slight discomfort on his left eye. Although I think they still feel slightly itchy today- he probably did scratch it a little but nothing a few eye drops cannot sort out.

Before he bought those lenses the shop did ask him to sign a disclaimer basically saying in the event he goes blind they are not at fault. I thought to myself “Wow, that is a bit drastic” but after seeing him struggling with them- yeah, I can understand why. My friend had a pair too and she said they irritated the hell out of her and her eyes would not stop watering all night. Not a great sign hey peeps so for the next halloween (or any other party you may attend), if you are tempted to wear those contact lenses have a little think first. Remember, not everyones eye shape is actually suitable for contact lenses so they may well be extra uncomfy for you if that is the case. With my husband looking like that he still managed to get chatted up by a girl.  As I was sitting only a seat away I had a giggle to myself- what a handsome zombie he makes. hehehe.