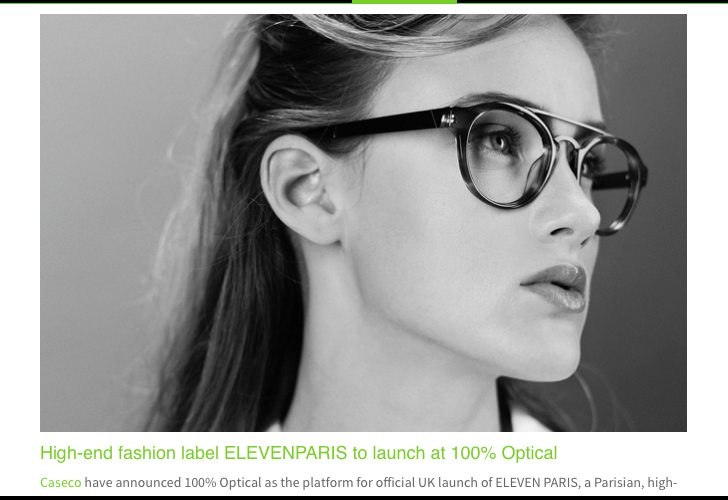 As everyone is counting down to Christmas, I am counting down to the opening of 100% Optical on the 7th February which is getting REALLY close now. Once Christmas and New Year is out of the way the show will be here before you even know it. The organisers are really picking up momentum with more and more brands joining the show.  There is one very, VERY exciting announcement to be made but I am just waiting for the green light before saying anything but I can promise you it is one of the most exciting collaborations I have seen for a while within an optical trade show. Stay tuned for more info 😉

ElevenParis Eyewear, who are they?

If you love your european fashion brands then you may have heard of this brand already- ElevenParis. The brand has been around since 2003, it is a majorly contemporary brand for both men and women. It captures the minimal spirit with a bit of an edge in all their designs and the brand has got a bit of a rocky vibe too. In the past we have seen some rock royalty as the face of their campaigns. This includes Lenny Kravitz, legendary punk-rocker Iggy Pop and the latest face to join the brand is Kate Moss. It is safe to say ElevenParis is the fashion brand to watch in the UK over the next year.

ElevenParis Eyewear to Launch at 100% Optical

It was only in 2013 when we saw the launch of the very first flagship store open in London’s Carnaby Street.  Other than that the brand is sold in some of the most well known fashion retailers such as Selfridges and ASOS. It is highly exciting for us spectacle wearers that another super fashion brand is diving into the world of eyewear and giving us more choices of fashionable frames. There will be a mens and womens optical range with a unisex sunglasses range and they will be officially launching them during 100% Optical. If you want to check them out then head to the Caseco stand at E30 because these are the guys that produce them.  They have other brands under their belt too which are worth checking out.

It is sooooooo exciting to see so many eyewear brands coming to London either for the first time or using 100% Optical as the platform to launch their brand as this is only the second show! I am feeling very proud and honoured to be a part of this show and I am seriously looking forward to the show opening! Have a great weekend peeps, the last one before Christmas and good luck if you are out shopping- eeeekkk! See you back here on Monday.