I finally got around to watching American Hustle! I have wanted to watch this film since it came out in December 2013 but I never got around to doing it. I always love watching films that are based on a true story because they are so much more fascinating.  I was like “how on earth can they con so many people?”. I would not think to do that in a million years.

Another reason to watch it is my favourite eye candy Bradley Cooper who was one of the leading characters however, EXTREMELY unsure on his hair style even though I know it is the fashion back then.  I was even more unsure when he had rollers all over his hair at one point in the film, haha. However, my dad had a perm in the 70’s and I bet he looked like that too! Oh god the embarrassment! haha!

Anyway, whenever I watch films that are set in a certain periods I am always very much drawn to the fashion and I am so fascinated by the detail.  I am always wowed by how or where did the wardrobe department find those clothes? One thing I noticed from the film was the eyewear! I was in love with all of them and the character Christian Bale plays (how much weight did he put on for the role???). Irving was always wearing a pair of specs. They always seemed tinted but then I find a lot of glasses I see from that era always looked tinted. Perhaps it was the lens technology used at that time or it was just the fashion back then. 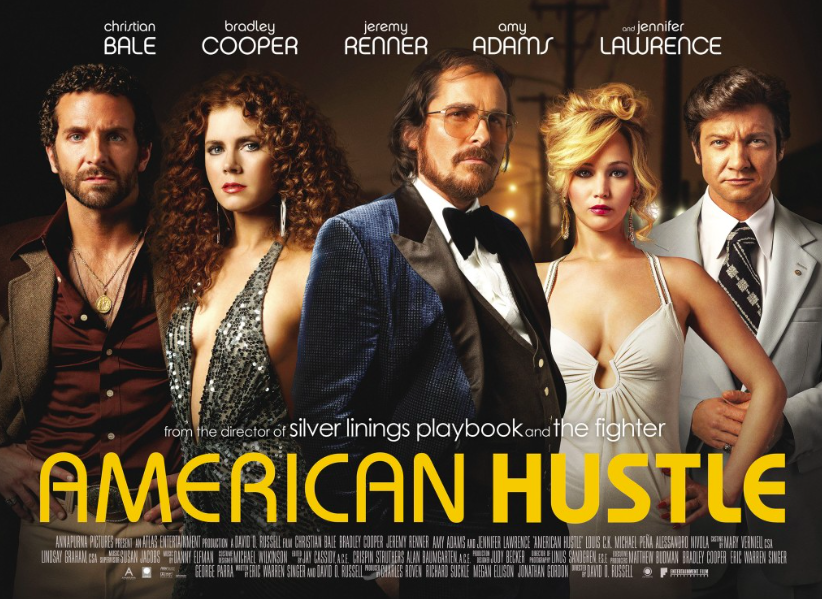 However, as well as Irving’s glasses his on screen partner in crime Sydney played by Amy Adams was also wearing some rather damn cool looking sunglasses from the 70’s. I am actually quite a huge fan of the 70’s eyewear fashion because I love how ridiculously big they are all. It is one of my favourite eras for eyewear and I do wonder how long it will take for the current eyewear trends to go back to that era. Some are big but still don’t have the full 70’s vibe.

70’s glasses fashion I can deal with and the clothes too but please gents… no perms! If Bradley Cooper cannot pull it off then I don’t think any man could. Not even you dad back in your hey day and no I do not wish to dig out my dad’s old photos and show you what he looked like.

Like me,  if you love looking at the fashion in films and love a film based on a true story then I highly recommend American Hustle. It is a fascinating story line and I am still a bit gob smacked at how they were conning people and so good at it.  GOD I would love to have a nose at a film wardrobe department just to see how they source everything.