Coca Cola… what an iconic brand and what an iconic drink! I mean who hasn’t had a least one can of coke in their lifetime? I personally am more of a Pepsi kinda girl but I am still quite happy to drink coke if I don’t have the choice. I have to dedicate this post to my closest friend who is currently living in the land of Oz because she is such a coke addict! She will literally drink about 10 CANS A DAY or if she is having a stressful day the number could be higher and the funny thing is…. she is a doctor. Yes, she should know better than to drink this amount of coke a day and her dentist bill is probably quite Hefty too but it is her thing and she loves it. In fact, on her wedding day we all bought her a pack of diet coke to calm her wedding nerves.

So anyway you must all be thinking what has coke got to do with eyewear? Well believe it or not this iconic drink and their iconic contoured bottle have reached a grand old age of 100 years old! The very recognisable bottle was first created back in 1915 and it was revolutionary.  Even now 100 years later the design has really stood the test of time. To mark this occasion Coca Cola have launched a campaign called “I’ve kissed” and of course celeb faces are used from style icons such as Marilyn Monroe to Rita Ora. The idea of the campaign is very simple, it basically symbolises anyone can kiss happiness by drinking a bottle of Coca Cola. To mark this superbrand campaign Rita Ora has been spotted wearing Linda Farrow! 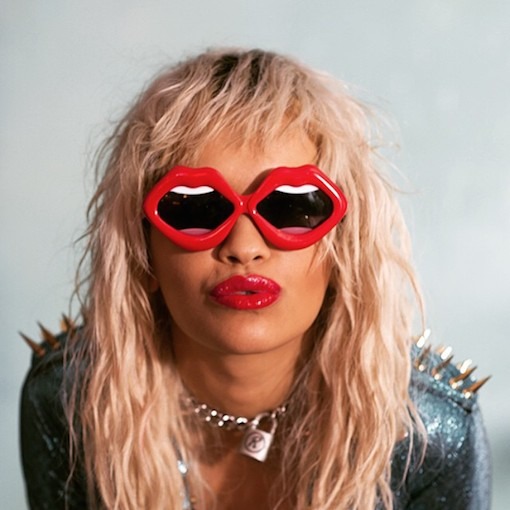 These very striking frames are called Yaz Bukey by Linda Farrow Gallery and they are such an appropriate frame to wear for the campaign. Rita Ora totally rocked that look with her studded jacket and padlock necklace. If you love it and want to get the look then these lips frames could be yours for £165 if you head to the Linda Farrow web page. They also come in pink which are just as striking so you can pick whichever colour you want.

On that note don’t you think these red lips sunnies are also perfect to wear for comic relief which is happening tomorrow night! All the Specsavers comic relief glasses have sold out at my local store so maybe I should consider those Linda Farrow beauties as my comic relief glasses.  Then again I am probably too late to get my hands on a pair considering it is tomorrow. Stay spexy people 😉