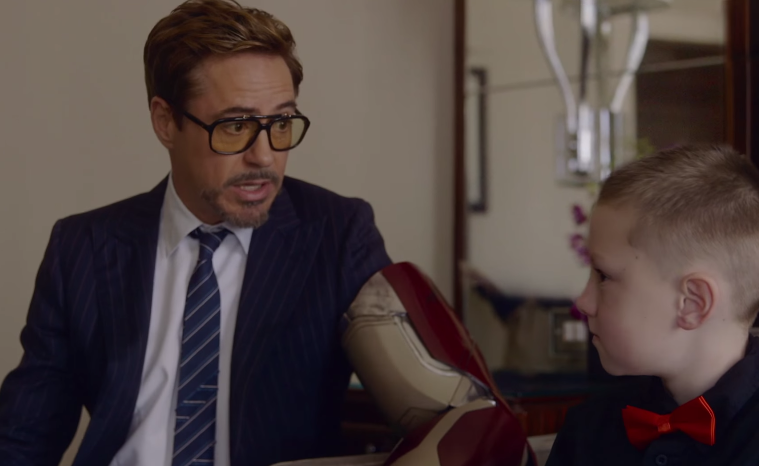 Sorry about the delay with this post!  Courtesy of Sky broadband as had a MAJOR outage which lasted most of Friday and into this morning too!  Anyway, to the post…

Robert Downey Jr is probably well known for playing one of the most iconic Marvel characters, Iron Man!  I have to say he is actually probably my favourite Marvel character too with all his gadgets and his sense of humour. I don’t know but he is just way too cool and I think Robert Downey Jr plays that character so well and I am sooooo looking forward to the next Avengers movie coming out this spring! However, with the baby due any time around then I am unsure how likely I will be able to make it to the cinema to watch it… sad times. A DVD it is. Anyway, most kids that I have encountered all LOVE Iron Man and this morning when this The Collective Project video went viral on social media I had to watch it because it involved Iron Man himself.

If you haven’t watched it then I recommend it because it is rather heart warming and one of those videos that makes you feel warm inside just by seeing that boy’s face lights up. The Collective project is basically a bunch of very clever students who want to make a difference in the world by using their knowledge to help others who are less fortunate. In this particular video it was a student called Albert Manero who founded the volunteer group Limbitless Solutions to build affordable, bionic, 3D-printed arms, in which he makes the designs available to others for free. Pretty amazing hey! Watch the Video below!!!

Robert Downey Jr was completely in his Iron Man Character and the boy looked surprised, shocked and cute all at the same time when he shook his hand. The boy Alex is 7 and was born with a partially developed right arm and he LOVES super heroes so it really could not get better than this when the man himself Robert Downey Jr was there to greet him and show him the bionic arm since he was an “expert in the field” with Stark Industries.

Whilst watching this clip I was totally obsessed with his choice of frames too! Robert Downey Jr is definitely one of those Hollywood celebs who can rock all sorts of different styles of specs and look super cool. The ones he is wearing in the video I do believe he has them worn before during the Iron Man 3 premier. I have been searching online to see if there are any clues as to what they are but nothing. They do look a bit Carrera like or maybe even Cazal, they just had that kinda of vibe to them but of course I could be completely wrong because he does wear so many other brands too such as the Japanese brand Matsuda. 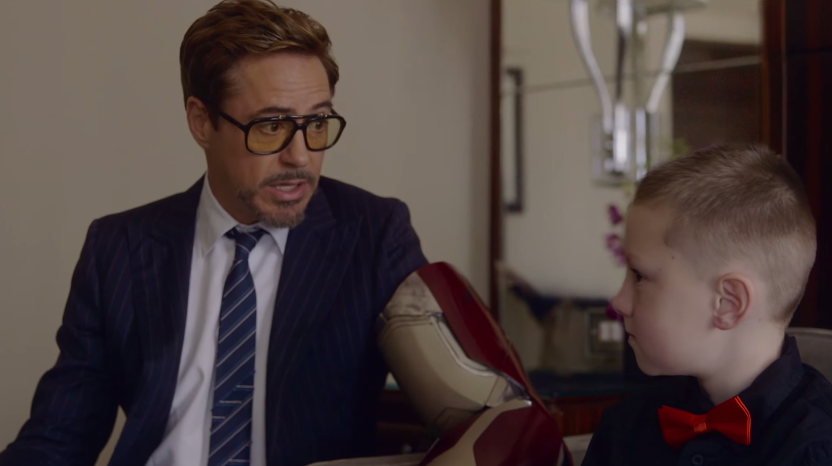 I will keep searching and see if I can find out what glasses he was wearing but he often wears glasses with tinted lenses and is a fan of Transitions too as he was spotted wearing them before during another premier. Either way those glasses really suit him, a classic Aviator style thats been revamped with a bold frame… a defo a thumbs up from MGAM 😉 On that note have a fabulous weekend and see you back here on Monday!