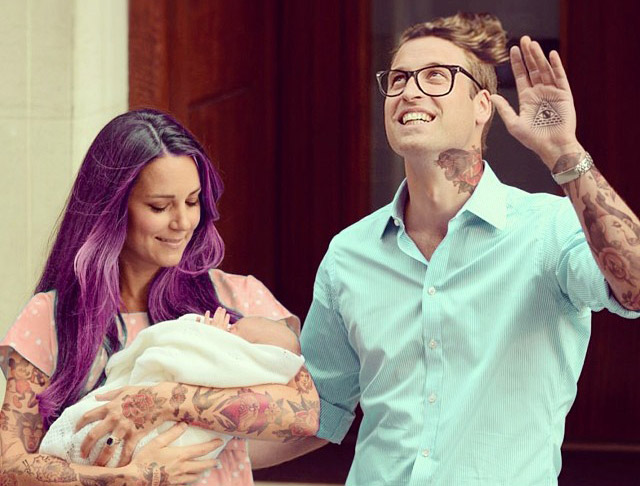 Last week we of course saw the birth of Princess Charlotte. Personally I am not a massive royal follower but I am a fan of William and Kate because they seem like a nice couple and seem like they are in love. I have been following Kate’s pregnancy because my sister in law had the exact same sickness as her and of course I was also pregnant myself so it was nice to know she gave birth (rather quickly) to a healthy baby. When she stepped out of the hospital and showed off princess Charlotte to the world, didn’t she look stunning? I wish I looked like that when I left the hospital.  I know some people or the media have been commenting on how great she looked but some were saying as if any women will look this great after birth.

I feel sorry for Kate because I think there must be a lot of pressure on her to look good all the time. I think either way she can’t win! If she rocked out of hospital in jogging bottoms then she will probably be criticised too which is why I found this photoshopped picture of her and William rather funny. The artist is Cheyenne Randall and has photoshopped many other iconic celeb images just out of curiosity and to see what these celebs could look like if they took another path in life.

I personally think tattoos really suit William, not forgetting those glasses, I mean wow don’t they look great on him! After seeing that imaginary photo I kind of hope William will one day wear glasses because you never know with his influence, people may really start to see glasses differently. However, can you imagine if Kate wore glasses? Now that would be a massive influence since the media is forever obsessed with what she is wearing. I can only hope that one day this may come true.  The main image was of Prince George and the one below of Princess Charlotte.  All that is missing on Prince William is those glasses!

I do wonder if Prince William ever needs to wear glasses, what style he would wear because lets face, with him being a royal with a certain image to “live up to” I am pretty sure anything too fashionable will be out of the question. It would be pretty epic if he ever has tattoos and be all rock and roll.  Maybe we can hope that Prince Harry would do that because he is the more daring one after all 😉