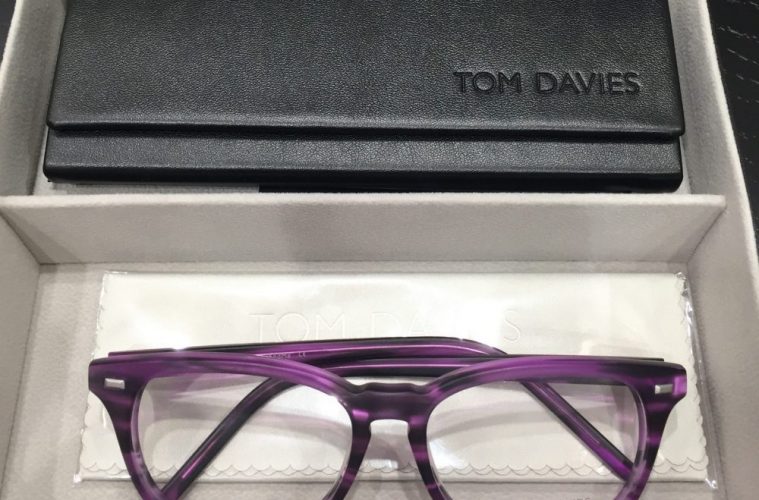 Back in late December 2017, I had the privilege of experiencing the Tom Davies bespoke service and you can read about it here. In the end I went for a matt finished acetate frame. I picked up the frame in early January 2018 ready to take with me to the Opti Munich optical show. It was also the first time I got to wear them constantly and what did I think? Did they fit like a dream, like a tailor made suit?  Not exactly, no.

First of all, I just want to explain why it took me so long to write this post. Soon after Opti, my baby arrived 1 month early so straight away I went on maternity leave. The glasses needed some adjusting to make them fit better and I was not able to pop back into store until basically one year later back in February this year (2019). It has been quite a year and quite an experience for me as I stepped back into motherhood for the second time round, to a premature baby. Coming back from maternity leave, things were a little busy too. Juggling being a mum of two and working freelance.

So, back to the glasses… 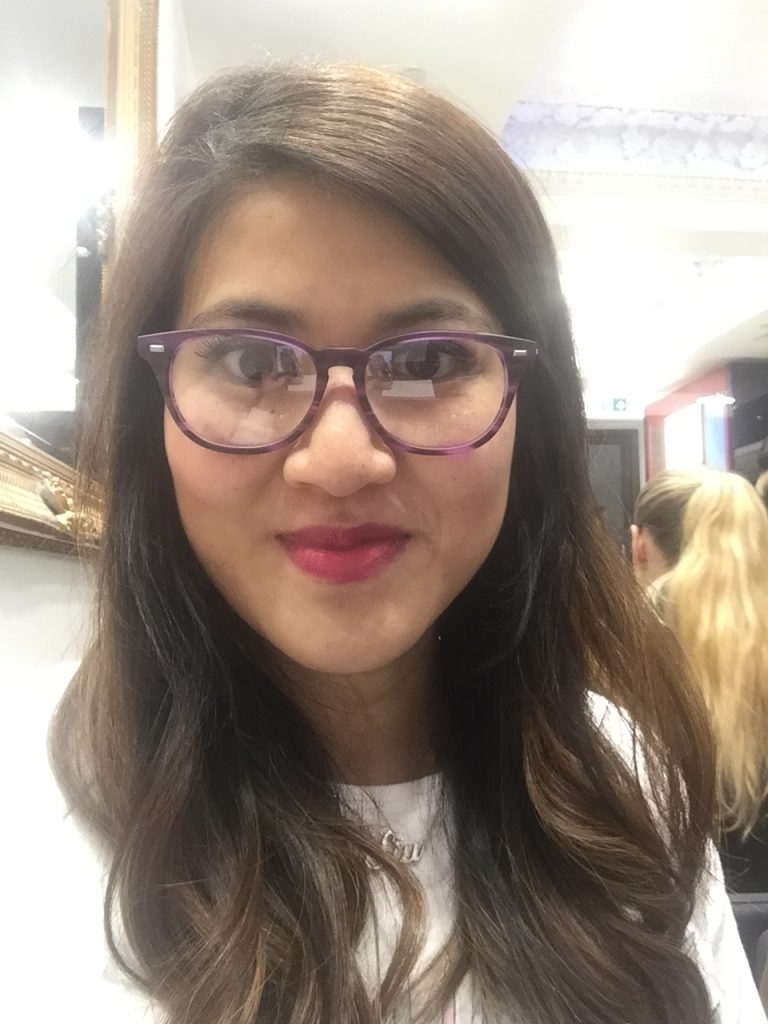 During my first Appointment with Fake lashes on

I remember I had my first fitting for the glasses right after Christmas 2017. It was the day I did the photoshoot for TEF magazine around London. It was freezing, I was 31 weeks pregnant so it was memorable. Once the shoot finished I went to get my glasses fitted. I had fake eyelashes on for the shoot and during the fitting, I did ask if I should take them off so it would be more accurate. However, I was reassured there was no need although I was not 100% convinced.

Fast forward another 2 weeks when I picked them up ready to take to Opti (Yes, I went to an optical show in Germany when I was nearly 34 weeks pregnant. ha!). I put them on and initially, they felt good, better than any acetate I have ever owned. However, after constant wear at Opti, problems started to surface. They were constantly slide down my nose and ended up resting on my cheeks, then end up marking my cheeks. I don’t know if that was down to my prescription being -4.75 on left and -4.50 on right but I did get thinner lenses so they sit really nicely against the acetate frame and are of course much lighter too.

Waiting to fly to Munich for Opti 2018

For me (who has worn some not so well fitted acetate frames), I really didn’t think this would be a problem with my Tom Davies Bespoke. I thought since the acetate would be tailor made for my face, they would fit like a glove.

I love a product called Nerdwax which I sell online via the MGAM shop which helps stop glasses from sliding off.  Time and time again I have had so called industry experts telling me there is no need for such nonsense if a frame fits well. This frame I had tailor made that was supposed to fit well, didn’t, and funnily enough Nerdwax helped the situation.

I am not claiming I am a design expert nor that I know how a frame is best designed and made. I can only tell you from a wearers prospective. I have worn many different types of frames due to what I do and I came to the conclusion that my bespoke frame needed to be adjusted to sit on my nose at a slightly different angle so they will not rest of my cheeks so much and cause marks. To me, they just did not sit right on my nose. It felt like they needed to be lifted up to stop them from sliding.

After taking a year off on maternity leave. I went back to have them looked at. I was hoping they can somehow fix the issue or maybe re-take my measurements and compare it to the glasses. Unfortunately, that did not happen. I was offered to have metal nose pads fitted as the solution. Don’t get me wrong, I do know it is very common to have nose pads fitted onto an acetate frame so they can be adjusted to fit different nose shape.

However, this is Tom Davies bespoke. I guess I expected more. I have other generic “mass produced” frames at home that are acetate with a metal nose pads that fit me really nicely. I asked myself if I was a paying customer, would I be satisfied? The answer is no. 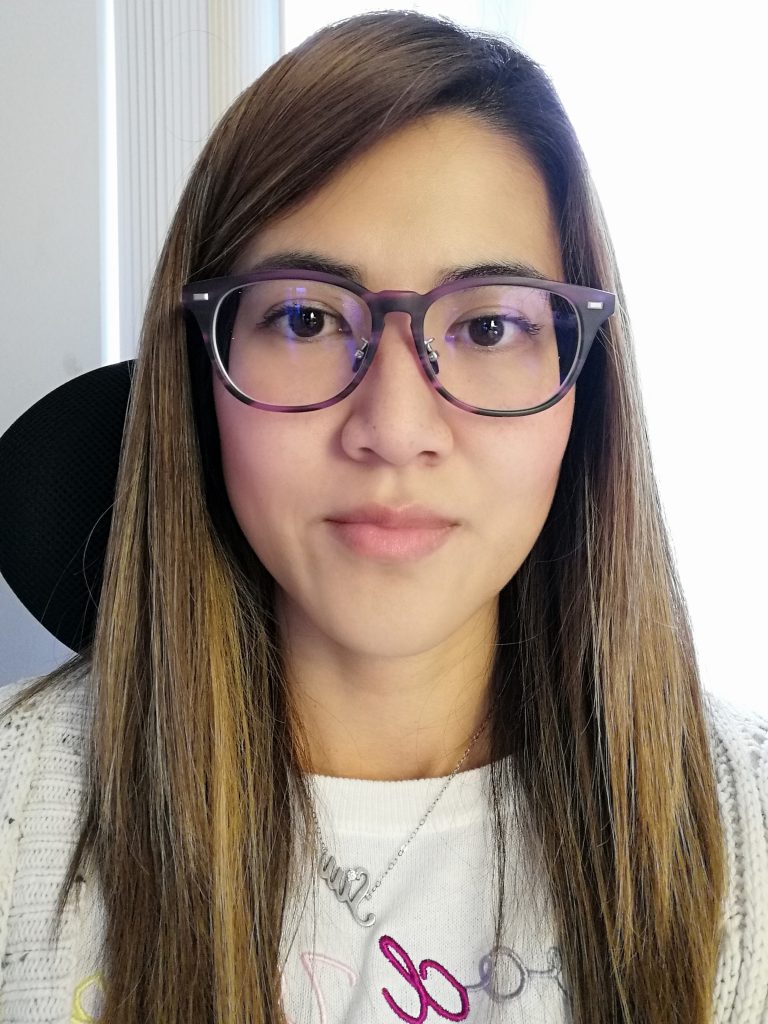 These frames were a gift from Tom Davies PR team as they wanted me to experience the bespoke service and see what I think and of course would be grateful if I write about it.

I was more than happy with the bespoke service itself. It was very thorough, I felt special and well looked after from start to finish. However, I cannot help but feel disappointed with the finished product. They simply didn’t fit me and ended up with just having nose pads to make them fit… just like any other frame.

If I was a paying customer, I would ask myself, why did I pay £400+ for glasses to just have an acetate frame with nose pads. I could of spent less money on another brand that do nice acetate with nose pads. In fact, I’ve got a few of those within my collection that fit me really well.

If you take a look at the photos, you can see the before and after nose pads, so you can see what I mean. Perhaps the end result would have been different if I did take off my fake eyelashes during the first fitting, I did offer. Either way, I will never know, but all I know is that this acetate frames only fit me with nose pads.